Most exclusive places in the world in one place.

Top 5 books about the history of Barcelona

Through books about Barcelona, you will be able to find out the secrets of the city that guides and review pages rarely tell you. The writers, enticed by the beauty of Catalonia´s capital, show the reader a new perspective about the city of Barcelona. Why not dedicate time to books about the city, in order to make your stay in Barcelona that little bit more magical?

It is worthwhile starting a fascinating journey around the world of literature dedicated to Barcelona with a book that was written in 2001 by Carlos Luis Zafon. Many positive reviews and impressive volumes of sale make it possible to consider “La Sombra del viento” as one of the best books about the history of Barcelona.

Critics sometimes try to challenge the literary value of a book, but there is no doubt that what Zafon achieved was to discover, in a suprising way, the archetypal places of Barcelona. The atmosphere of the Gothic Quarter, the apperance of La Rambla, the beauty surroundings of Montjuic, the summit of Mount Tibidabo, the marvellous sunrises and sunsets in Barcelona, the brilliance of these icons of Barcelona are described in this book. After having read this book, without a doubt you will want to see the places written about with your own eyes.

2. “La Catedral del Mar”, a book about Barcelona in the Middle Ages

In this book written by Ildefonso Falcones in the 14th century, the reader is shown Barcelona, swept up by the construction boom and the development of craftsmanship, without forgetting the beauty of the city. The plot includes the construction of the Gothic Church, Santa María del Mar, in the historic neighbourhood of Barcelona. The book places great attention to the facts registered in documents from this era. 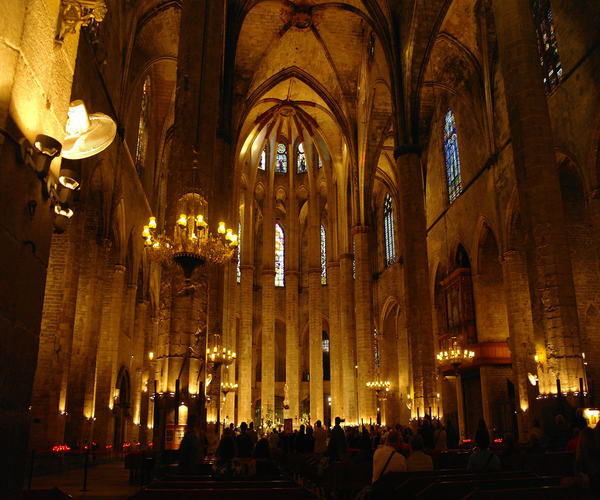 When writing this novel, Ildefonso Falcones spent a lot of time studying historic chronicles, in an attempt to show how the feudal system of Barcelona actually worked, leaving no stone unturned. The book, through images of people involved in the construction process, describes the spirit of recovery and the increasing size and importance of Barcelona each year.

In modern day, the locals of Barcelona hold “La Catedral de Santa María del Mar” in highest regard. The book about Barcelona written by Falcones, narrates the appearance of one of the most popular places for weddings. The readers will find themselves on a journey to Medieval Barcelona.

3. “The colour of a dog running away”

This is a book about detectives that perfectly describes the way of life in Barcelona. Critics note the talent of Richard Gwyn to create unusual Works.

In this novel, Barcelona is a ever-changing city, where the conditions aid commercial and navegational development. This book tries to get across to the reader that the enchanting capital of Catalonia is greatly connected to the metamorphisis under actual reality. During the reading process, you can imagine the detailed apperance of the Tibidabo Park, the beauty of Barcelona at night or the wonder of the Cathedral de Santa María del Mar.

Eduardo Mendoza, who´s style is most similar to classical works, rather than novels in the last decade, wrote a book about Barcelona. The events that occur happen between the global expositions in 1888 and 1929.

The book lets us know in detail the way in which Barcelona was preparing for an event on this scale, overcoming its differences with the Spanish capital. All the changes that happened in the city, that were supposed to bring in people from all over the world, are described in great detail. The book about Barcelona, by Mendoza, is an encyclopedia full of information about the places that appeared in the exhibitions and symbolic structures that have been conserved until this day.

5. “A homage to Barcelona: a book in guide format”

We end this list with a book about our city written by Colm Toybin. An Irish authour that has lived in Catalonia´s capital for many years. Because of this he is a very trustworthy guide for us to use.

“Homenage a Barcelona” is a book about how Catalan culture was formed, how the city was able to survive the horrors of the Spanish Civil War, teach artistic brilliance and reach where it is today. The book will reveal to you many secrets of Barcelona!

We hope you enjoyed this blog and feel inspired to read the novels we have introduced you to! As well as this, get a chance to visit all of the places in Barcelona that you read about and impress your travelling companions with your new knowledge.

The Northern Lights in Iceland: how to avoid disappointment

There are no comments yet for this article

4.
Sunshine in September: where to travel to

1.
Supporting the recovery of tourism in Asia: Villa vacation destinations to visit in the near future

3.
Sunshine in September: where to travel to

4.
A guide to Africa’s top 5 most luxurious safari lodges

Supporting the recovery of tourism in Asia: Villa vacation destinations to visit in the near future

A Caribbean getaway to the ABC Islands